Since last week’s presidential elections (February 18) in Armenia there have been protests around the country alleging widespread election fraud. The presidential campaign was certainly eventful, with one candidate going on a hunger strike and another being shot (non-fatally). The officially reported electoral returns came as a surprise to many. The American-born Raffi Hovannisian from the oppositional Heritage Party, got 37 percent of the votes. Considering that in last year’s parliamentary elections the party got only 3.8 percent of the seats, this can be considered quite a feat. Many questions arise, one of which concerns the extent of election fraud in the 2013 elections compared with last year’s parliamentary elections. I find that there are indications of more fraud in last week’s elections.

First, examining indications of outright fabrication I note a suspicious deviation from the expected uniform distribution in the vote counts for the ruling party in 2013. There is no such pattern in the 2012 data, supporting the hypothesis that there was more fraud in 2013. In the absence of manipulation of vote totals the last digit should follow a uniform distribution of 10 percent in each of the 0-9 digit categories – the vertical bars in the graph (Beber & Scacco, 2012). The deviation from uniform is significant at the 0.1 percent level in the 2013 elections, while non-significant in 2012 (p-value = 0.981) 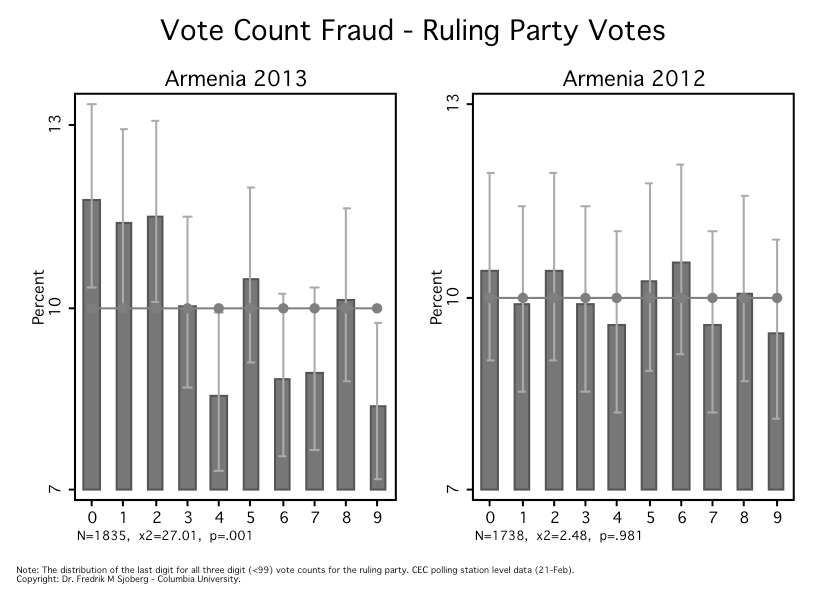 There is anecdotal evidence of fraud from domestic election observers, like the crowdsourcing platform iditord.org. There are only four incidents of calculation errors or falsification, constituting 1 percent of the 390 incident reports that were categorized. Actually, the most frequently occurring types of incidents reported where either intimidation (11 percent) or vote buying (10 percent). Fraud forensics based on digit-tests would not be able to capture such phenomena.

For the latter type of electoral manipulation we can graph turnout as a kernel density plot to detect anomalies. A Kernel plot is a non-parametric estimation of the probability density function of a random variable. Such a smoothing of the distribution helps us spot irregularities compared with the expected normal distribution. Examining the plots visually reveal an ‘unnatural’ hump at the right-hand tail as we would expect if there was ballot stuffing, or other blatant forms of fraud that would increase turnout. The hump is certainly more articulated in 2013 compared to 2012, again suggesting that there was more fraud in 2013. 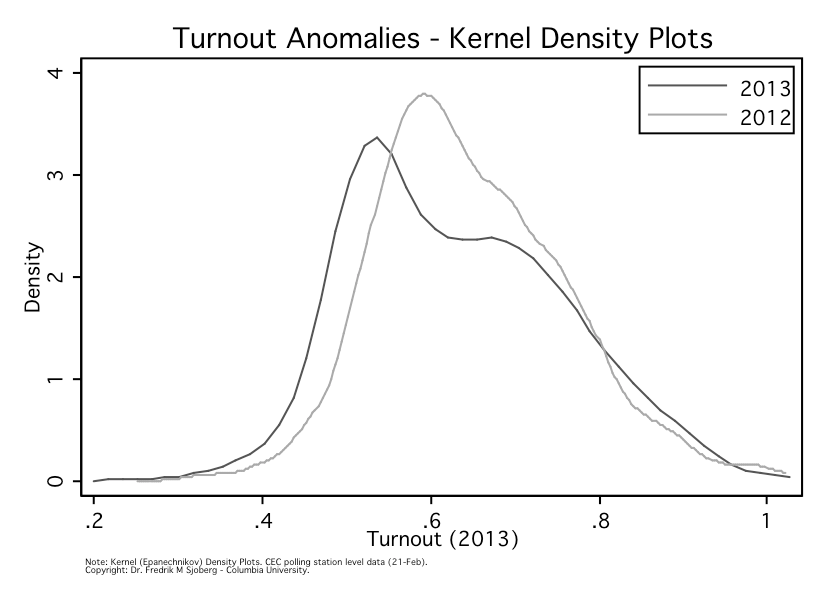 In a context where authorities claim that there was no fraud and the opposition alleges widespread fraud, such forensics tools can be helpful as a piece of evidence. These are only diagnostic tools though and should be interpreted with caution. Other organizations have put out similar analyses, for instance Policy Forum Armenia (PFA). It remains to be seen whether the citizens of Armenia overcome the well-known collective-action problem of whether or not to protest. Who knows, the spring might come early to Armenia this year?